Synopsis:
She’s a romantic at heart, living in the most unromantic of worlds . . .

Nicknamed Sweet Abelli for her docile nature, Elena smiles on cue and has a charming response for everything. She’s the favored daughter, the perfect mafia principessa . . . or was.

Now, all she can see in the mirror’s reflection is blood staining her hands like crimson paint.

They say first impressions are everything . . .

In the murky waters of New York’s underworld, Elena’s sister is arranged to marry Nicolas Russo. A Made Man, a boss, a cheat—even measured against mafia standards. His reputation stretches far and wide and is darker than his black suits and ties. After his and Elena’s first encounter ends with an accidental glare on her part, she realizes he’s just as rude as he is handsome.

She doesn’t like the man or anything he stands for, though that doesn’t stop her heart from pattering like rain against glass when he’s near, nor the shiver that ghosts down her spine at the sound of his voice.

And he’s always near. Telling her what to do. Making her feel hotter than any future brother-in-law should. Elena may be the Sweet Abelli on the outside, but she’s beginning to learn she has a taste for the darkness, for rough hands, cigarettes, and whiskey-colored eyes. Having already escaped one scandal, however, she can hardly afford to be swept up in another.

Besides, even if he were hers, everyone knows you don’t fall in love with a Made Man . . . right?

This is a standalone forbidden romance.

END_OF_DOCUMENT_TOKEN_TO_BE_REPLACED

Synopsis:
You’re cordially invited to the wedding of Maximoff Hale & Farrow Keene, and according to Celebrity Crush–the ceremony for this American prince and his tattooed bodyguard is going to be the event of the century.

There will be no wedding crashers.

Including but not limited to: hateful people, rabid fans, nosy paparazzi, and other so-called media.

There will be no drama.

None whatsoever. Because when you put three famous families and their hot bodyguards together, nothing will go down.

There will be no fighting.

No brawls, fists flying, verbal slingshots, or rifts that tear into craters. Lovers only!

Everything will be perfect.

Nothing will go amiss during the happiest, most anticipated occasion of the year. But then again…

They don’t call it the Hale Curse for nothing.

END_OF_DOCUMENT_TOKEN_TO_BE_REPLACED

In this sexy paranormal romance novel set in the world of the Black Dagger Brotherhood, #1 New York Times bestselling author J. R. Ward tells the story of two couples—both fighting to find love in the midst of the war with the Lessening Society.

A vampire aristocrat, Peyton is well aware of his duty to his bloodline: mate with an appropriate female of his class and carry on his family’s traditions. And he thought he’d found his perfect match—until she fell in love with someone else. Yet when his split-second decision in a battle with the enemy endangers the life of another trainee, Peyton has to face the idea that his future, and his heart, actually lie with another.

Novo, as a female in the Black Dagger Brotherhood’s training program, feels like she has to prove herself to everybody—and she has no interest in being distracted by falling in love. But when Peyton proves to be so much more than a rich playboy, she is forced to confront the tragedy that has broken her soul and closed her off from love.

END_OF_DOCUMENT_TOKEN_TO_BE_REPLACED

Synopsis:
His Bodyguard. His Love.

Maverick, know-it-all bodyguard Farrow Keene knows publicly dating American royalty comes with a great cost. Everyone wants a piece of their relationship. And as a protective boyfriend, he’s not here for the malicious hands that grab at their love life and seek to rip them apart.

But Farrow is confident — he’s confident that he could’ve never prepared for the storm to come.

Maximoff Hale isn’t a big fan of change. And to regain the charity CEO position he lost, he agrees to a task that he’s always rejected. One that could uproot his unconventional world.

But Maximoff is afraid — he’s afraid of the consequences that could destroy his boyfriend and his family.

Changes are on the horizon.
Big.
Messy.
Complicated.
Changes.
Maximoff & Farrow will fight for their forever. And with every breath, they promise that their love story won’t end here.

END_OF_DOCUMENT_TOKEN_TO_BE_REPLACED 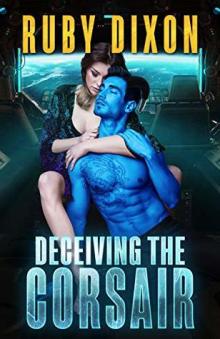 Synopsis:
The crew of the pirate ship the Lovesick Fool are worried about their navigator, Sentorr. He’s obsessed with working, spending all his time on the bridge. It’s not work the big blue alien is truly obsessed with, though.

Sentorr’s convinced that Zoey, a female navigator on another pirate ship, is his mate. She won’t show him her face, though, or agree to meet him. She’s happy to have steamy, late-night conversations with him over comm channels, though.

He’s determined to find her and claim her, no matter what it takes. But when he does locate her and discovers that she’s been lying to him about who – and what – she is, will he still love her?

Or is the fact that Zoey’s human too much for this blue-skinned male?

END_OF_DOCUMENT_TOKEN_TO_BE_REPLACED

Synopsis:
What if damnation is the price of true love?

Innocent blood has been spilled on the steps of the Council Hall, the sacred stronghold of the Shadowhunters. In the wake of the tragic death of Livia Blackthorn, the Clave teeters on the brink of civil war. One fragment of the Blackthorn family flees to Los Angeles, seeking to discover the source of the disease that is destroying the race of warlocks. Meanwhile, Julian and Emma take desperate measures to put their forbidden love aside and undertake a perilous mission to Faerie to retrieve the Black Volume of the Dead. What they find in the Courts is a secret that may tear the Shadow World asunder and open a dark path into a future they could never have imagined. Caught in a race against time, Emma and Julian must save the world of Shadowhunters before the deadly power of the parabatai curse destroys them and everyone they love.

END_OF_DOCUMENT_TOKEN_TO_BE_REPLACED

Synopsis:
They call me the Devil’s assassin. It’s true. I have blood on my hands.
As the VP of the Serpents, my life is driven by loyalty, honor, brotherhood.
Until I see her.
Too young, too innocent. Mine to claim.

What I am, what I do, can never reach her. My dark secrets are scars I bear alone.
I’m torn between my duties and the woman I’ll die to protect.
Until…they try to take what’s mine.

END_OF_DOCUMENT_TOKEN_TO_BE_REPLACED

Six For Sunday is a weekly meme created by Steph @ A Little But A Lot. The meme was created to list 6 things we love/hate every Sunday. The prompts are mainly bookish but I will add things from TV shows also in certain prompts since I love to cheat.

This post contains major spoilers for all the couples I picked.

END_OF_DOCUMENT_TOKEN_TO_BE_REPLACED

Synopsis:
Honor is the president’s daughter and she’s expected to behave a certain way. She’s spent her whole life living by the rules…until the newest member of the Secret Service shows up.
Washington has done his best to watch her and keep his hands and his dirty thoughts to himself. But it’s her eighteenth birthday and he’s been left in charge of guarding her. How closely can he watch her body without giving in to his urges? Not long.