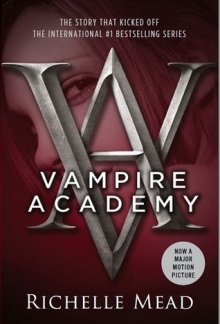 Synopsis:
Only a true best friend can protect you from your immortal enemies . . .

Lissa Dragomir is a Moroi princess: a mortal vampire with a rare gift for harnessing the earth’s magic. She must be protected at all times from Strigoi; the fiercest vampires – the ones who never die. The powerful blend of human and vampire blood that flows through Rose Hathaway, Lissa’s best friend, makes her a dhampir. Rose is dedicated to a dangerous life of protecting Lissa from the Strigoi, who are hell-bent on making Lissa one of them.

After two years of freedom, Rose and Lissa are caught and dragged back to St. Vladimir’s Academy, a school for vampire royalty and their guardians-to-be, hidden in the deep forests of Montana. But inside the iron gates, life is even more fraught with danger . . . and the Strigoi are always close by.

Rose and Lissa must navigate their dangerous world, confront the temptations of forbidden love, and never once let their guard down, lest the evil undead make Lissa one of them forever . . .

Ruby @ Rubysbooks and I were planning to only buddy read Bloodlines but she asked me if I’d like to read Vampire Academy too (which Bloodlines is spin off from) and I thought it was brilliant idea since I haven’t read this series since I first read it. Read Ruby’s review here.

The world in this book is a little different from usual vampire books since there’s not only ‘normal’ vampires but there’s Moroi (100% vampires) and Dhampirs (half vampire/half human). Dhampirs can have children with both Moroi and humans but not with each other for some reason.

“You are so beautiful, it hurts me sometimes.”

Usually all I care about in books is how much I enjoyed the romance but not with this one. My favorite oart about the whole book is actually friendship between Lissa and Rose even if both can annoy me sometimes. They can be like day and night; Rose is the one who takes action and makes sure things happen– sometimes recklessly while Lissa is reasonable, thinks things through out and researches them extensively before acting. These two friends just trust each other and would do anything to keep each other safe.

That friendship also had it flaws, like Rose trying to tell Lissa who she can date and Lissa expecting Rose to take care of everything, like a feeder in a party.

“If you try to turn me against Lissa one more time the stories are going to be about you bleeding because I’ll have ripped your throat out!”

Rose Hathaway is one of the first badass female characters I remember reading since finding out that I love reading. I had no memory of her heritage but apparently her mom’s Scottish and dad’s (who she doesn’t even know who he is) Turkish.

I’m not sure yet if I’m going to enjoy the romance between Rose and Dimitri this time around. I don’t see the chemistry between them yet but I did swoon when he gave her that gift. But I’m all here for romance between Lissa and Christian and hopefully we get to see more scenes between them in Frostbite. Christian might be a jerk sometimes but who can blame him after how Lissa changed in his eyes and he’s still protective of her and wanted to help her.

I didn’t enjoy this book as much as I wanted to. Maybe I’ve watched the movie too many times but I knew almost everything that was going to happen. There wasn’t many changes and few changes that were there happened in the last hundred pages.