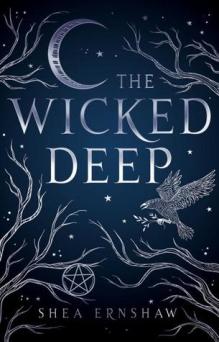 Synopsis:
Welcome to the cursed town of Sparrow… Where, two centuries ago, three sisters were sentenced to death for witchery. Stones were tied to their ankles and they were drowned in the deep waters surrounding the town. Now, for a brief time each summer, the sisters return, stealing the bodies of three weak-hearted girls so that they may seek their revenge, luring boys into the harbor and pulling them under. Like many locals, seventeen-year-old Penny Talbot has accepted the fate of the town. But this year, on the eve of the sisters’ return, a boy named Bo Carter arrives; unaware of the danger he has just stumbled into. Mistrust and lies spread quickly through the salty, rain-soaked streets. The townspeople turn against one another. Penny and Bo suspect each other of hiding secrets. And death comes swiftly to those who cannot resist the call of the sisters. But only Penny sees what others cannot. And she will be forced to choose: save Bo, or save herself.

The Wicked Deep has been in my TBR forever but I was too afraid to try it until I won it in a giveaway! I was going to read it when I got it in this summer but then I was like hey this would be perfect October read. Me and Kaleena @ Reader Voracious decided to read it for blogoween. You can read her review of this book here.

This book wasn’t what I was expecting. It was supposed to be about witches but instead it was about three sisters accused to be witches before they were drowned, so they come back every summer to kill bunch of people.

I think this was more like a ghost story than about witches. I kept waiting for Swan sisters to use some kind of witch powers– I would’ve been satisfied if they had even killed people in some witchery way (OK, so they had those guys in some kind of spell) but this book was supposed to be about witches and I was a little disappointed.

I did enjoy the mystery! I didn’t see those revelations coming. I did have a moment once that I was like: “How didn’t I see that coming?”

I loved Penny and Bo but I found their ‘love’ lacking. I didn’t really see chemistry there and there was no “Aww” moments. The ending didn’t help me like this romance any more.

All in all the book wasn’t what I was expecting but I ended up enjoying it anyway. It even made me cry a few times.

13 thoughts on “Buddy Read: The Wicked Deep by Shea Ernshaw”