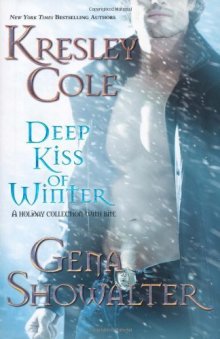 Synopsis:
#1 NEW YORK TIMES BESTSELLING AUTHOR KRESLEY COLE delivers a breathtaking tale of a brutal vampire soldier about to know love for the first time… and a Valkyrie aching for his touch.

Murdoch Wroth will stop at nothing to claim Daniela – the delicate Valkyrie who makes his heart beat for the first time in three hundred years. Yet the exquisite Danii is part ice fey, and her freezing skin can’t be touched by anyone but her own kind without inflicting pain beyond measure. Can they conquer an agony of frustration and slake the overwhelming desire burning between them?

A buddy read with Ruby @ Bookishly Ruby. You should check her review here. This book restored my hope for the series. I had to DNF the last books since I couldn’t like either the hero or heroine enough to continue but this one had a tight grip of me from the beginning.

“And if you don’t think I can hold my own against all those eighteenth-century mortals you were out tagging, then you’re a fool, Casanova…Oh, yes, I know all about you.”

I loved Daniela and how she didn’t apologize for liking Murdoch, knowing everything she could loose. She really just wanted to be cared and loved for but she couldn’t be touched by anyone but the Icere who wanted her dead. Daniela didn’t feel like she fit her and sisters and just wanted a male of her own to make home with.

Murdoch Wroth thought Daniela is brave and beautiful but he could be such a dumbass. He saw what happened to his brother after he met his beloved and refused to let that happen to himself. Most vampires refuse to be separated from their beloved but Murdoch did the opposite. He tried his best to make her leave him and even managed to make her feel like she was expendable.

I had conflicting feelings towards Murdoch. I usually absolutely hate manwhores but for some reasons I loved and hated him at the same time. Like I said: he’s a dumbass. He was in total denial and even kissed another females before going to see Daniela. They’re fated mates and vampires feel the bond more than her kind so it kinda pissed me off and I saw it as cheating. I also feel like if he had been allowed to touch her, he would have been a lot more acceptable about their relationship. I just felt like he messed up time and time again.

All in all I greatly enjoyed reading Untouchable. It felt a little role reverse since for once we had the bride who wanted the bond while our vampire wanted to stay away. This book felt like a fresh air after the last book of the series. I didn’t dislike Murdoch but I also felt like Daniele deserved a better male. He did so little to make sure she knew her loneliness was over.