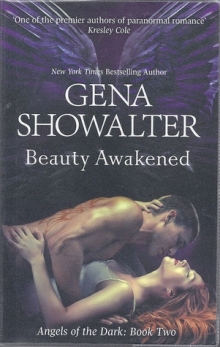 Synopsis:
His name is Koldo. He is scarred, powerful, his control legendary-and he lives only for vengeance, determined to punish the angel who viciously removed his wings. But if he yields to the forces of hatred, he will be kicked from the heavens, eternally damned.
She is his last hope. Nicola Lane was born with a defective heart, yet this fragile human shows surprising strength as demons stalk her every move, determined to end her. She is the key to Koldo’s deliverance…and his downfall. Though he fights duty, destiny and his first addictive taste of desire, his toughest battle will be the one for Nicola’s life-even if he has to sacrifice his own….

Honestly I wasn’t going to re-read this one. I just was in front of my bookshelf and had to pick a book to bring with me to my sister’s and before I know it “Beauty Awakened” was in my hands. I have been thinking this book a lot since I saw Addicted To Romance review it in her blog. I don’t own the first book though, so I left the book alone. You can’t stop mood reader from picking a book she owns, though.

I felt so bad for our hero in the book. First Koldo had to survive a mother who hated for no reason. Cornelia was kind to everyone but her own son and she could get mad from the littlest things, like him cleaning her room. Koldo just wanted her to love him but instead she abused him when he was a child and told him how she wished she had drowned him when he was too young to fight back. Then she gave him up to his father who was even more evil and abusive than his mother.

I still loved Koldo and Nicola’s relationship. I have no idea why I haven’t re-read this before but they didn’t have as many amazing quotes than I remembered them having. Koldo didn’t think he deserved her and wanted to take care of her and her twin. Koldo’s so clueless about relationships but he’s also possessive of Nicola.

What I didn’t like about the book was Laila, Nicola’s sister. She didn’t believe her sister or what was happening even after everything had happened. Also it was like she didn’t want to heal and I just don’t get what was the point with her character. Just to show how much Koldo was ready to do for Nicola and how much Nicola loved her sister?