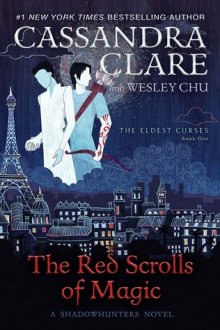 Synopsis:
All Magnus Bane wanted was a vacation.

A lavish trip across Europe with Alec Lightwood, the Shadowhunter who, against all odds, is finally his boyfriend. It doesn’t seem like too much for the centuries-old High Warlock to ask for. But no sooner have they settled in Paris than an old friend arrives with news about a demon-worshipping cult called the Crimson Hand that is bent on causing chaos around the world. A cult that was apparently founded by Magnus himself. Years ago. As a joke.

The first book in the Eldest Curses series from #1 New York Times bestselling author Cassandra Clare and award-winning science fiction author Wesley Chu, The Red Scrolls of Magic is a fast-paced adventure bursting with magic, humor, and (if demons stop getting in the way) romance that offers a fresh look at the world of the Shadowhunters.

“It’s a classic love story. I hit on him at a party, he asked me out, then we fought an epic magical battle between good and evil side by side, and now we need a vacation.”

I was so exited about this book back in the beginning of 2019 but I had just finished rereading the whole The Mortal Instruments. I wasn’t really sure if I wanted to (or felt necessary) to read Magnus & Alec’s story since back in my mind I’d know this was before the heartbreak. But it was Malec, so of course I couldn’t resist.

The Red Scrolls of Magic sets on between City of Glass and City of Fallen Angels. Magnus takes Alec to Europe, wanting to take a step away from their messy lives, and see if they really work out a way to be really together.  But of course their trip gets interrupted by this cult that Magnus may have or may have not founded.

“About that. I deeply appreciate you saving my life. I’m very attached to my life. However, if it comes to a choice between your life and mine, Alec, remember I have already lived a very long time.”

I was so happy to see Alec being kickass without his siblings, especially considering he hadn’t killed any demons before City of Bones.. There has always been something about Alec that made him my favorite Lightwood but he kinda gets shadowed by his reckless family and I was so happy to see how he works without them (not that I dislike Izzy or Jace) but I just love Alec and his POV was something I didn’t think I needed more of. We got to see Alec wondering how Magnus sees him but instead of forcing Magnus to share things with him, he was understanding and even told him that Magnus didn’t need to tell him anything unless he wanted to.

I remember Magnus always being so sure of himself that it was nice to see him being a little insecure and unsure about his relationship with Alec. Is it weird that I love how much Magnus cares about food? I might not eat breakfast but I love food and I could eat 24/7.

I love how these two see the best in each other and Magnus sees more in Alec than probably anyone in his life. I like that Alec usually finds everyone annoying before getting to know them but Magnus was never annoying to him.

“If your warlock is doing something evil, we’re going to have to cut off his head.”

It was amazing to also see how Aline and Helen met. I rarely ship females together but those two are just so cute. I also enjoyed introduction of Leon and how he wasn’t afraid to go after what he wanted. I also love how we got to see a certain character that died in The Mortal Instruments again.

All in all I enjoyed this book very much. It made me laugh, it had action and I really enjoyed the romance even if I wish there had been even more of it. Unfortunately I felt like Alec went through some character growth that wasn’t there in City of Fallen Angels and the mystery reveal wasn’t shocking for me. I can’t wait to get my hands on the second book.

2 thoughts on “Book Review: The Red Scrolls of Magic by Cassandra Clare and Wesley Chu”