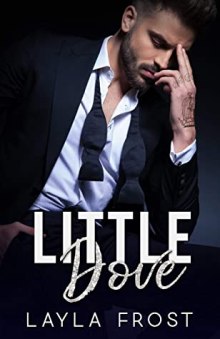 Synopsis:
Where do I begin?

Once upon a time.

Isn’t that how all good fairy tales start?

And Maximo and I, we were definitely a fairy tale.

Not the cleaned-up, sanitized ones where life’s problems were solved with a smile and a song. We were the old-school kind. The twisted tales packed with murder, violence, and tragic beginnings.

Okay, so maybe we weren’t a traditional fairy tale. After all, Maximo was more villain than prince. He was scarily sexy. Devilishly charming. Controlling, possessive, and dangerous.

Especially when it came to me.

And heaven help anyone who tried to free me from my gilded cage.

Warning: Recommended for readers 18+. This book features graphic language, sex, violence, and a Daddy obsessed with his little dove. If this doesn’t sound like your kind of fairy tale, this may not be the book for you.

Little Dove was my first book by Layla Frost. I was nervous about this standalone  but after seeing it recommended as “touch her and you will die” trope I knew I had to give it a chance.

Little Dove features Juliette who has had a tragic life. Neither of her parents cared about her and her dad had debts. These debts often made Juliette the one to suffer and she didn’t know what it felt like to be cared by someone, until she meets Maximo. Their meeting wasn’t a fairytale but he’s the one person who has even taken care of her.

The heroine is only seventeen years old but the hero waits until she’s eighteen. Maximo even tries to avoid her to not be tempted. Juliette is insecure and it takes awhile for her to trust him. She didn’t think she’d get anything besides temporary because of the way she was raised.

This story isn’t for everyone since it features daddy kink but I actually like many books with it. I liked how in this book Juliette even did some research about it before saying yes to anything, including the fact that daddy kink doesn’t always equal daddy issues.

“No one takes you from me, little dove. No one opens your cage.”

Maximo ‘s obsession grew over the year he was waiting for Juliette and he was never letting her go. I think these two characters fit together perfectly. They were both possessive and got jealous easily and while Juliette needed someone to care for her, he loved taking care of her. He didn’t care what she wanted: he was ready to give her anything she wanted expect letting her go. He had given her that choice before they got together and all bets were off after she agreed him to be her daddy. One of my favorite things about the romance was that neither wanted to change the other. Juliette even knew the monster he was from the beginning and she wanted him exactly as he was.

All in all surprising read! I don’t think I disliked everything. I might have gotten frustrated by Juliette sometimes but I understood her behavior. Little Dove was everything I wanted and more. I loved the romance and even all the side characters.