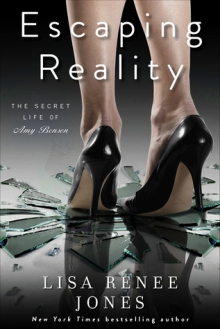 His touch spirals through me, warm and sweet, wicked and hot. I shouldn’t trust him. I shouldn’t tell him my secrets. But how do I not when he is the reason I breathe? He is what I need.

At the young age of eighteen, tragedy and a dark secret force Lara to flee all she has known and loves to start a new life. Now years later, with a new identity as Amy, she’s finally dared to believe she is forgotten–even if she cannot forget. But just when she lets down her guard, the ghosts of her past are quick to punish her, forcing her back on the run.

On a plane, struggling to face the devastation of losing everything again and starting over, Amy meets Liam Stone, a darkly entrancing recluse billionaire, who is also a brilliant, and famous, prodigy architect. A man who knows what he wants and goes after it. And what he wants is Amy. Refusing to take “no” as an answer, he sweeps her into a passionate affair, pushing her to her erotic limits. He wants to possess her. He makes her want to be possessed. Liam demands everything from her, accepting nothing less. But what if she is too devastated by tragedy to know when he wants more than she should give? And what if there is more to Liam than meets the eyes?

It has been few years since the last time I reread Escaping Reality, so I decided that it was finally time when I saw a book from the series I haven’t read in Scribd. Unfortunately they only translated two books and Unbroken isn’t available in physical form.

“While being alone sucks, losing someone you care about is far worse.”

This story is about Amy Bensen, a girl with fake name and fake life and who is running for her life. Something happened to her family when she was younger and on the plane she meets Liam Stone, a billionaire and an architect. She tries her best to resist him but there’s just something about him that makes her trust him and not leave him.

Amy’s always alone. She has no one and the only person she has been able to trust somehow over the years is her so called handler but she has no idea who they are.

I liked the romance between Liam and Amy. He knew she was hiding something but he didn’t push too much for her to reveal her secrets. He still trusted her from the beginning and was only worried about her running away.  Liam only wanted her to be her and she didn’t want his money but he wanted to spoil her rotten.

All in all really enjoyed this but the cliffhanger kills me every time.