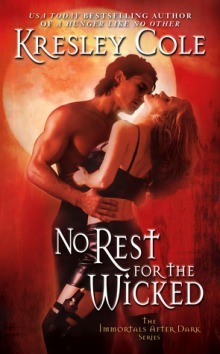 Synopsis:
In this next installment in the Immortals After Dark Series, USA Today Bestselling author Kresley Cole delivers a scorching tale about a forbidding vampire who lives in the shadows and the beautiful assassin who hunts him there.

A vampire soldier weary of life…

Centuries ago, Sebastian Wroth was turned into a vampire—a nightmare in his mind—against his will. Burdened with hatred and alone for ages, he sees little reason to live. Until an exquisite, fey creature comes to kill him, inadvertently saving him instead.

A valkyrie assassin dispatched to destroy him…

When Kaderin the Cold Hearted lost her two beloved sisters to a vampire attack long ago, a benevolent force deadened her sorrow—accidentally extinguishing all of her emotions. Yet whenever she encounters Sebastian, her feelings—particularly lust—emerge multiplied. For the first time, she’s unable to complete a kill.

Competitors in a legendary hunt…

The prize of the month-long contest is powerful enough to change history, and Kaderin will do anything to win it for her sisters. Wanting only to win her, forever, Sebastian competes as well, taking every opportunity—as they travel to ancient tombs and through catacombs, seeking relics around the world—to use her new feelings to seduce her. But when forced to choose between the vampire she’s falling for and reuniting her family, how can Kaderin live without either?

No Rest for the Wicked was surprisingly good! I was starting to think every book of the series was going to be just about three stars from me but wanted to keep going because I don’t think I ever would if Ruby @ Bookishly Ruby wasn’t buddy reading the series with me.

“Don’t stop kissing me, vampire, or I will kill you.”

I usually absolutely love alpha males but I liked that Sebastian was a beta male. Unlike other male characters so far he’s so patient and there’s nothing toxic about his relationship with Kaderin, even if I wanted to hit her sometimes. Slow burn romances can be so annoying sometimes.

Kaderin was resisting Sebastian even if he’s the reason she feels emotions again. I love how much she loves her sisters and would do everything for them.

All in all enjoyable read and I love how for once this series had a couple that I didn’t find toxic in anyway. I admired Kaderin’s loyalty and how Sebastian was finally able to forgive his brother. Sebastian trusted Kaderin to make her own choices and that’s something I can admire in a male character.

I hope we find out in later books if his ability to find her anywhere is just Sebastian’s ability or if other vampires can do that, too.

1 thought on “Buddy Read: No Rest for the Wicked by Kresley Cole”