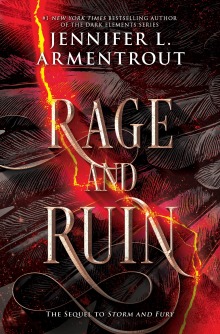 Synopsis:
A half human, half angel and her bonded gargoyle protector must work with demons to stop the apocalypse while avoiding falling in love. The Harbinger is coming… but who or what is it? All of humankind may fall if Trinity and Zayne can’t win the race against time as dark forces gather.

As tensions rise, they must stay close together and patrol the DC streets at night, seeking signs of the Harbinger, an entity that is killing Wardens and demons with no seeming rhyme or reason. Forbidden to be with each other, Zayne and Trinity fight their feelings and turn to unusual sources for help—the demon Roth and his cohorts. But as deaths pile up and they uncover a sinister plot involving the local high school and endangering someone dear to Zayne, Trin realizes she is being led – herded – played for some unknown end. As anger builds and feelings spiral out of control, it becomes clear that rage may be the ruin of them all.

“You say I have a light about me, but you are my light.”

No one is more shocked than I was about me actually enjoying the second Zayne book. Honestly I never intended to even consider reading it but the synopsis mentioned Roth so how could I not? And thankfully Selene was about to start reading and thankfully agreed for a buddy read. Who knows how long it would’ve taken me to pick up this book otherwise?

I honestly didn’t remember almost anything from the first book, so thankfully the first few chapters reminded me of little thinks like who the hell Misha was. I can’t believe I forgot Peanut because he’s awesome and I need more of him in the next book.

The romance is a forbidden love since relationships between Protectors and Trueborns were strictly forbidden. We didn’t really get an actual reason but it was pretty stupid how they didn’t listen the warnings since they have seen Buffy from how many times Hellmouth was mentioned but thankfully Zayne is not Angel.

I thought it would’ve been interesting to see him without his soul, though. Selene didn’t agree with me since she has loved Zayne since like always. I still didn’t like him that much until before the big “fight” against their enemy. I just wasn’t big fan of him always giving all of his attention to a girl that isn’t his supposed love interest and even acting like a hypocrite. Trinity on other hand thought way too highly about him sometimes.

I still see Trinity as reckless but I didn’t see her as selfish as Layla and it was pretty weird how many times she was called selfish in this book since I didn’t see her that way. She was jealous many times, yes but she was trying to be a better person after what happened with Misha. She knew she couldn’t have Zayne, so she even tried to convince herself that it was better that he was hanging so much around Stacey.

Stacey was a character that annoyed me the most in this book. If you’ve read The Dark Elements you might know her as Layla and Zayne’s friend. She acted like everything involving Zayne is her business and Trinity should tell her what she is just because that? She’s a human girl and isn’t entitled to know everything. This just annoyed me but it made me laugh when she tried to threaten Trinity.

Despite enjoying the romance much more in the second book my favorite scene actually involved Roth. Surprise surprise! I loved to see him and Trinity working together. They’re just so badass together and I’d really love to see them becoming friends. I also enjoyed scenes with Layla and Trinity.

“Well, you’re going to need to put some clothes on, because I doubt Layla will be thrilled if I pick you up and you’re naked as the day you were hatched out of a little Trueborn egg.”

My least favorite thing about the whole book was– what I think can be called as love triangle but not really? It was just bad communication Zayne could feel how it made Trinity feel and made it even worse as trying to keep it as a secret and basically telling Trinity it wasn’t any of her business.

Zayne’s realization about Layla made me overjoyed. It’s just what I always thought about and I love that it’s now canon.

All in all this book still left me confused but I can say I’m a lot more invested in this story than I was after Storm and Fury. There were of course a character that I really disliked but I can’t wait to see what kind of friendships we’re going to have in the last book and that ending! It made me want to get my hands on Grace and Glory like yesterday.