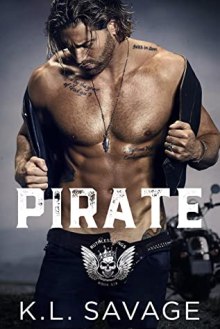 No matter how hard I try, I can never drown the memories. I miss alcohol.
The craving claws against my stomach every day.
And being in this rehab center doesn’t help.
No one understands how it feels to not be able save someone you love.
I had to watch Macy’s demise.
How she screamed for me to help her.
I hear those screams. They echo in my head. A song on repeat. And a patient here, Sunnie, she tries to make me feel better.
She reads a damn book to me every chance she gets, and it grinds my nerves.
Who the hell is that happy? She makes me want to drink. Then, she shares her pain, and I realize her bright disposition is a mask.
I find myself wanting to make her smile, to make her happiness permanent.
Nothing is ever that easy.
She and I have a common enemy.
My nightmare has been released from prison.
Her nightmare is the reason why he is free.
I want to be done with the MC after they made me go to rehab. But Sunnie deserves retribution.
Macy deserves to finally rest in peace.

Pirate is sixth book of Ruthless Kings MC series. I can’t believe it’s already the sixth one! I feel like I just started this series. I have enjoyed this journey but I’ll stop reading this series after Tongue’s book (my most waited one since starting the series) if next few books won’t get at least three stars from me. So many rated this one five stars but while I enjoyed the focus on the addictions the hero and heroine had– It just didn’t make me happy. The book felt too long for me and I just wish there was more romance.

“Heroes save everyone, and people who are weak, fail. That’s what I am. I’m a failure.”

Pirate aka Patrick has been alcoholic for eighteen years. He started drinking a year after what happened to his sister and it really pissed him off when people that had been drinking ofr like six months called themselves alcoholics or when they started drinking for stupid things like loosing a job or a cat. I think he might have been through more character growth than any character during this series.

Sunnie’s past wasn’t any better. He had a horrible father (surprise surprise!) and she became a druggie. I like that she wanted to get better and have a life with a husband and children.

“Our journeys might be different, but our pain is the same.”

Pirate and Sunny’s romance was forbidden love. I get why they shouldn’t have had a relationship while recovering but also they’re grown ups, so I didn’t really know what to feel about it. My favorite part about their relationship was probably when Pirate was still trying to dislike her and she kept reading smut for him. Patrick didn’t only want her because she was there and convenient but because she gives him hope and she understands him. It was sad that neither of them felt like they were worthy.

All in all good story about recovering but I found the romance a little lacking and while I really enjoy this series I wish every MC’s backstory didn’t involve a sister.