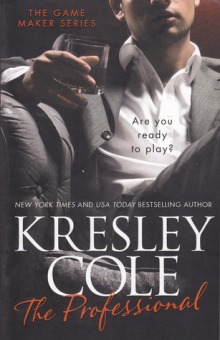 Synopsis:
The highly anticipated complete novel of The Professional—the first installment in #1 New York Times bestselling author Kresley Cole’s scorching Game Maker series, an erotica collection that has readers asking: How hot is too hot? Get lost in the sultry world of the Game Maker series with The Master, book two, and The Player, book three!

Mafiya enforcer Aleksandr “The Siberian” Sevastyan’s loyalty to his boss is unwavering, until he meets the boss’s long-lost daughter, a curvy, tantalizing redhead who haunts his mind and heats his blood like no other. Ordered to protect her, Aleksandr will do anything to possess her as well—on his own wicked terms.

He makes the rules.

Grad student Natalie Porter has barely recovered from her first encounter with the dark and breathtaking Siberian when he whisks her away to Russia, thrusting her into a world of extreme wealth and wanton pleasures.

In the game of obsession, two players are better than one.

Yet all is not as it seems. To remove Natalie from an enemy’s reach, Aleksandr spirits her into hiding. From an opulent palace in Russia to the decadent playgrounds of the mega-rich in Paris, the two lovers tempt each other’s boundaries to discover whether their darkest—and most forbidden—fantasies really can come true…

“I wasn’t a big fan of women trying to fix men, to change them. I always figured there were guys enough out there, so I should look for a total package that was already fully Ikea-assembled—or go without.”

The Professional is a book I have been wanting to read for awhile snce it was a rec from fellow blogger and I enjoy Kresley Cole’s Immortals After Dark series but I didn’t get the book until I heard ladies in Read Me Romance -podcast talking about it.

The Professional is about Natalie, who has been searching for her birth parents. She’s working in two (or three?) different jobs on top of her studies to pay for this search. She rarely is interested in guys because she’s like she calls herself the manalyst. She could always read men but there’s something about Sevastyan that she just can’t get a read on. He takes her to Russia to meet her paternal father.

I loved the heroine, maybe even more than hero. Natalie has lived a normal life but she takes everything about this new life so well. She’s a virgin but she hasn’t been waiting “the one” her whole life. Instead she thinks dating, love, and sex were all overrated.

“I’ll consider myself lucky, my elusive girl, once you consider yourself taken. Every man has a weakness; you are mine. I’e accepted that. Now you must accept me.”

The romance was angsty. There was a lot hot and cold behavior from the hero. Sevatyan didn’t like sharing things, like at all. Natalie took his behavior pretty well considering she had zero tolerance for men and their drama. It was still very enjoyable and I’d suggest giving this book a chance if you’re in the mood for something angsty.

I was surprised how much I actually enjoyed heroine’s father.

All in all I didn’t love the romance but I was still compelled to read it very fast. I mean I almost finished it in one sitting. The Professional made me smile like a crazy person but it also made me cry.

Do you guys have any mafia recommendations?