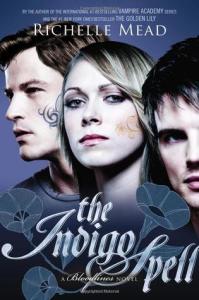 An ancient magic. A heart-wrenching decision… Sydney Sage is an Alchemist. She protects vampire secrets – and human lives. In the aftermath of a forbidden moment that rocked Sydney to her core, she is struggling to decide between following her Alchemist teachings – or her heart. Then she meets alluring, rebellious Marcus Finch, a former Alchemist who is now on the run. As Marcus pushes her to rebel, Sydney finds that breaking free is harder than she thought. There is an old and mysterious magic rooted deeply within her. And as Sydney searches for the person attacking powerful young witches, she realizes that she must embrace her magical blood – or else she will be next..

“You’re my flame in the dark. We chase away the shadows around each other.”

I knew I was going to love my Bloodlines buddy read with Ruby @ Ruby’s Books. I remember these books much more clearly than I did Vampire Academy books but I enjoy Bloodlines much more. You can read her review here.

Magic might still freak Sydney Sage out but she has still gone a long way from Vampire Academy. I can honestly say that she’s one of my all time favorite female characters. She’s insecure but she also knows better than listen to those insecurities. Unfortunately I didn’t like how he treated Ian, though.

“But when I touch you, your aura … it smolders. The colors deepen, it burns more intensely, the purple increases. Why? Why, Sydney?” He used that hand to pull me closer. “Why do you react that way if I don’t mean anything to you?”

There’s many things I love about the relationship between Adrian and Sydney but I also felt bad for our hero. I love how well Adrian knows Sydney after so little time. I’m not only talking about her aura but how passionate she’s about cars.

Art on other hand is a big part of Adrian and I love how Sydney likes that he could transform his deep emotions into art. Adrian preferred running away from fighting in Vampire Academy but he’s always there when Sydney wants to do something dangerous. I just love how Adrian only called Rose hot but he finds Sydney articulate, well dressed, smart and organized. He also thinks she’s beautiful but that’s the last word he describes her with instead of the first one. Adrian enjoys how she’s fiery and sweet at the same time.

As much as I love Adrian and Sydney’s relationship, Hopper might’ve been my favorite thing about this book. It’s like I love him more and more every time I read this book. How could I not swoon when this demon who looks like a tiny, tiny dragon thinks Sydney and Adrian are his parents and would do anything to protect them. Besides that, he eats pies.

I took half a star away from my last review of this book. You can read that review here. Reason for this is because some characters were annoying me, mostly Jill, Angeline and Sydney’s sister. I didn’t really mind Angeline in earlier books, despite her recklessness but I just hate how she acted in this book.

3 thoughts on “Buddy Read: The Indigo Spell by Richelle Mead”