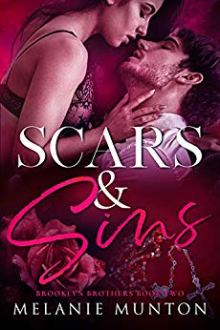 Synopsis:
From Amazon bestselling author Melanie Munton comes a tale of forbidden love between enemy families. The second book in the mafia romantic suspense series, Brooklyn Brothers, follows the secret romance of Roxy and her long-time crush–and best friend’s brother–Ace. If they’re discovered, it will start a war, and they’ll have much more to worry about than their own Scars & Sins…..

I liked being a part of blog tour, so I decided to scroll down some ARCs that were available for request in Netgalley. I saw the second book for Brooklyn Brothers there and I loved the cover and even though I knew it had friends to lovers couple I decided to give it a chance. I mean mafia romance? Count me in. I didn’t really think I’d be accepted but I did. I haven’t requested many ARCs but this one is the very first I was accepted.

“You never could sit still without some sort of device in your hands to fiddle with. Tell me the truth, you cuddle with your phone at night, don’t you?”

I didn’t like how there was a flash-forward after the prologue. They just always make want to jump to the part of the book that continues the prologue instead of focusing what’s happening at the moment and after that waiting the reason for the heroine’s “heartbreak” felt pretty lame.

This doesn’t mean I disliked the book. I actually enjoyed it but it wasn’t just for me. It’s rare for writers to be able to make me like friends to lovers trope, especially when the couple have known each other since the childhood.

“Keep calling her names, asshole. I’ve got all fucking night to beat the shit out of you. It’ll be the most fun I’ve had all week.”

Roxy wants to become a doctor and she’s part of one of the five (technically six) mafia families. Ace is intelligent. He never really saw Roxy as anything but his little sister’s friend. She even thought that he saw her as another sister. Roxy always had a crazy crush on her but he didn’t see her like that until she comes back home after five years. Now Ace doesn’t only want to protect her but he also wants her. It’s too bad that Roxy doesn’t want any part of their family drama.

I wish we had seen more about the whole mafia world but at least we got our happily ever after. At first I didn’t even think our heroine knew that her dad’s in the mafia. I still don’t really get why her dad didn’t put her into some self defense classes.

I still want to find out what happens with Nico (one of Ace’s brothers) after that ending.