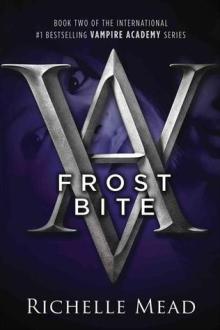 Synopsis:
Rose loves Dimitri, Dimitri might love Tasha, and Mason would die to be with Rose…

It’s winter break at St. Vladimir’s, but Rose is feeling anything but festive. A massive Strigoi attack has put the school on high alert, and now the Academy’s crawling with Guardians—including Rose’s hard-hitting mother, Janine Hathaway. And if hand-to-hand combat with her mom wasn’t bad enough, Rose’s tutor Dimitri has his eye on someone else, her friend Mason’s got a huge crush on her, and Rose keeps getting stuck in Lissa’s head while she’s making out with her boyfriend, Christian! The Strigoi are closing in, and the Academy’s not taking any risks… This year, St. Vlad’s annual holiday ski trip is mandatory.

But the glittering winter landscape and the posh Idaho resort only create the illusion of safety. When three friends run away in an offensive move against the deadly Strigoi, Rose must join forces with Christian to rescue them. But heroism rarely comes without a price..

This was not a happy book for any of the characters in my opinion but I still enjoyed it a lot more than the first book. I’m continuing buddy reading this series with Ruby @ Ruby’s Books. Read her review here.

“Everyone has light around them, except for you. You have shadows.”

I was really liking Lissa and Rose’s friendship in the first book and I really thought they were friendship goals when I was a teenager but this book also shows how faulted their friendship is. Rose puts her always, always first and I just don’t think that it’s healthy. She should be comfortable enough to share her problems too.

It can be annoying when Dimitri starts talking about Rose’s age but I cannot but agree on certain things, like how reckless she is and that teenage jealousy or thoughts about ‘oh, he doesn’t care about me anymore’. But truthfully Dimitri acts more like teenager than she does, sometimes. He’s the one that suddenly starts ignoring her and making her jealous even if the latter isn’t in purpose. If that isn’t a recipe for teenage drama, what is?

“This isn’t a Christmas special! This is my life. In the real world, miracles and goodness just don’t happen.”

It’s too bad Dimitri is’t in love with Tasha or Rose isn’t in love with Mason because truthfully at the moment I saw those two couples working better (until you reach the end of the book of course). I mean Dimitri is always so serious but Tasha makes him laugh and he acts casual, teasing and even playful with her.

I sometimes forget Mason ever existed but at the moment I just love him to bits. He’s had had a crush on Rose for ages and all he really wants is to be cared by her and destroy Strigoi. I liked him and Rose together because they’re alike and he’s always been there to help her.

Before ending this review can I just mention how glad I am that Adrian Ivashkov finally make an appearance? He’s maybe the main reason I wanted to reread this series. I can’t wait to see all the character growth he’ll go through from now to falling for Sydney in Bloodlines? I’m just not exited to see the pain he’ll go through in this series.