Synopsis:
WHEN SILENCE IS ALL THAT’S LEFT, CAN THE TRUTH FINALLY BE HEARD?

Nora Grey can’t remember the past five months of her life. After the initial shock of waking up in a cemetery and being told that she has been missing for weeks – with no one knowing where she was or who she was with – she tried to get her life back on track. Go to school, hang out with her best friend, Vee, and dodge mom’s creepy new boyfriend.

But there is this voice in the back of her head, an idea that she can almost reach out and touch. Visions of angel wings and unearthly creatures that have nothing to do with the life she knows.

And this unshakable feeling that a part of her is missing.

Then Nora crosses paths with a sexy stranger, whom she feels a mesmerizing connection to. He seems to hold all the answers…and her heart. Every minute she spends with him grows more and more intense until she realizes she could be falling in love. Again.

I’m continuing this angel series with Sam @ Fictionally Sam. I don’t love them as much as I did when I was a teenager, unfortunately.

“If I lose you, I lose everything.”

Nora lost her memories people closest to her kept lying to her instead of helping her actually get her memories back. I can’t believe that the guy she knew like few seconds told her the truth instead of the love of her life, best friend or even her mother. I get that they didn’t like Patch but how about her other memories? No one has right to decide what’s better for her.

Patch is still the only character I’m enjoying to read about. I just don’t like when characters do what I call Angel -move. By that I mean “I want to be with a girl but I’m gonna leave her instead for her own protection.”

Is it weird that I liked Nora without her memories? Without her memories she knew that actions spoke louder than words but she started doubting Patch almost immediately after remembering who he is. I just feel like her relationship with Patch has had zero development. You’d think she’d have learned to trust him but apparently not.

The whole book didn’t pick up until I had like 25% left of the book, so I decided to only give it two stars.

Synopsis:
Nora and Patch thought their troubles were behind them. Hank is gone and they should be able to put his ugly vendetta to rest. But in Hank’s absence, Nora has become the unwitting head of the Nephilim and must finish what Hank began. Which ultimately means destroying the fallen angels – destroying Patch.

Nora will never let that happen, so she and Patch make a plan: lead everyone to believe they have broken up, and work the system from the inside. Nora will convince the Nephilim that they are making a mistake in fighting the fallen angels, and Patch will find out everything he can from the opposing side.

Together, they will end this war before it can even begin.

But even the best-laid plans often go awry. Nora is put through the paces in her new role and finds herself drawn to an addictive power she never anticipated.

As the battle lines are drawn, Nora and Patch must confront the differences that have always been between them and either choose to ignore them or let them destroy the love they have always fought for.

I had so much one rereading this series with Sam @ Fictionally Sam, no matter how much most of it’s character’s action annoyed us. I’m not afraid to say that Sam agrees because we both wanted to hit our heads at something because of how stupid or annoying those characters acted.

“If you can’t count on family, who can you count on?”

I don’t understand Blythe (that’s Nora’s mom) at all. I don’t know if it’s something Hank did to her but not only were she acting like Marcie is her daughter but says that Nora is the one used to getting her own way. Did she forget all the years Marcie made Nora cry because she was so used to getting everything she wanted. Talking about Marcie– why wasn’t I surprised when she called Bangel (Buffy & Angel) as one of iconic couples.

Vee’s still not acting like a good friend. She didn’t annoy me as much because she didn’t appear a lot but Scott has known Nora like few months, I think and he’s still better friend than Vee has been in any of these books. Vee calling Nora a hypocrite was just a joke.

“Your mom isn’t going to let me step foot inside this place. I’ve seen the gun she keeps on the top shelf of the pantry.”

Patch and Nora had almost the same storyline in their romance as in earlier books but they were actually communicating and I loved that. Did they share everything with each other? No but it was still improvement. It still drove me insane when Nora complained about being a team and about not sharing things when she had her own secret.

All in all I enjoyed Finale more than the mess that’s Silence but I think like every single character (except Scott) drove me insane in a way or another. Another reason why I didn’t give it more than three star was that Epilogue. I just felt like it was unnecessary, like the writer just didn’t know what to do after a character death. 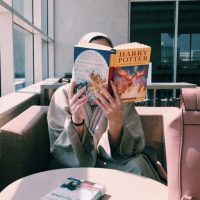 Lover of all things bookish 🖤