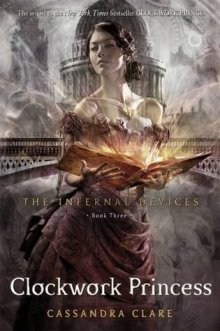 Synopsis:
Tessa Gray should be happy — aren’t all brides happy? Yet as she prepares for her wedding to Jem Carstairs, a net of shadows begins to tighten around the Shadowhunters of the London Institute. A new demon appears, one linked by blood and secrecy to Mortmain, the man who plans to use his army of pitiless automatons, the Infernal Devices, to destroy the Shadowhunters. He needs only one last item to complete his plan of destruction. He needs Tessa. And Jem and Will, the boys who lay equal claim to Tessa’s heart, will do anything to save her

Clockwork Princess is the final installment for The Infernal Devices series. I’d recommend reading the series ASAP if you haven’t already.

“There are so many worse things than death. Not to be loved or not to be able to love: that is worse.”

There’s so many amazing characters in this series but I think Henry is under appreciated. That’s why one of my favorite scenes were when Magnus was supportive of his inventions, maybe even a little exited while Henry was used to everyone telling him to stop suggesting new inventions and cease setting things on fire. He’s such a cinnamon roll and he deserves the world.

I don’t want to spoil anything about Jem, Will and Tessa but I love them more and more every book. Will and Jem’s friendship is like the best bromance I have ever read. You can’t change my mind about this, OK? Why can’t I have a friend that loves me as much as they love each other? They’d do anything for each other.

Gideon and Sophie is definitely the superior ship for me between the ships involving Lightwood brothers. Yes, it wasn’t smart what he did just so he could see Sophie but it was also sweet. Gideon had never even given the prettiest of shadowhunters a second glance but even his brother could see that he fancied her.

Clockwork Princess made me suffer but I also enjoyed it? I don’t cry often but this book right here made me cry more times than I can remember. This time around I didn’t at least throw the book across the room like when first time read the epilogue back in 2013, I think.