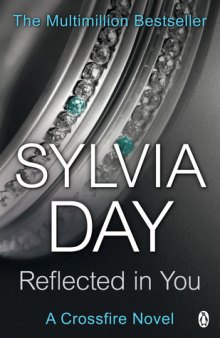 Synopsis:
Gideon Cross. As beautiful and flawless on the outside as he was damaged and tormented on the inside. He was a bright, scorching flame that singed me with the darkest of pleasures. I couldn’t stay away. I didn’t want to. He was my addiction… my every desire… mine.

My past was as violent as his, and I was just as broken. We’d never work. It was too hard, too painful… except when it was perfect. Those moments when the driving hunger and desperate love were the most exquisite insanity.

We were bound by our need. And our passion would take us beyond our limits to the sweetest, sharpest edge of obsession…

Reflected in You is the second book of Crossfire series. I wouldn’t pick this one up if you want some light reading. This one has a ton of angst and I even cried in one scene.

I know Day can write lgbt+ characters since I really enjoy scenes Eva has with her boss and his boyfriend but I just don’t like Cary. He can be good friend for Eva but I hate how he’s written. He has his issues but being bi doesn’t mean you need to be with both woman and male especially when you have feelings with only one of them.

Gideon and Eva are as passionate as ever but their relationship isn’t all sunshine and rainbows. There’s mistrust, Gideon’s behavior while he’s asleep and someone from Eva’s past is back etc.

It’s not helpful when even thinking about Gideon and his ex in the same room together kills Eva with jealousy. She doesn’t really know how she can trust him when he doesn’t share things with her which causes them to fight a lot. Gideon would rather fight with her than laugh with anyone else, though.

I love these two together but they can frustrate the hell out of me as characters. I get why Gideon doesn’t share his past with her. Just because Eva shared hers doesn’t mean he needs to but what about little things that would calm her mind like when he was having dinner with his ex fiance instead of her finding out from google alert. It’s kinda weird that she has one for him since she keeps complain about being stalked by his driver. Eva on other hand is a pushover who just should you know talk with Gideon instead of running away or thinking the worst.

I think it’s sweet that Eva’s friend thinks Gideon isn’t good enough for her and Gideon’s friend doesn’t think Eva is good enough for Gideon. Not that anyone could blame either one after knowing what has happened between the two.