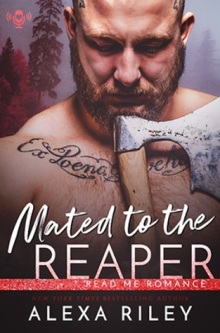 Synopsis:
He’s dying for her. The Grim Reaper will stop at nothing to find her… let’s just hope she’s ready to be claimed.

This is the second book I listened to this through the Read Me Romance podcast. Mated To The Reaper sets on the same word as their Virgin Blood series. I haven’t read those since they’re only available in Amazon but they’re about vampires.  I didn’t even notice that there were another Alexa Riley book in the podcast untl Ruby asked me if I had started it. I knew that I would like to listen to the whole book in the same day so I waited until all the “episodes” of the books were out.

Our heroine is a hybrid. Her mother’s a vampire and father a slayer. Ariella has many same powers as vampires like the strength and high senses but unlike other vampires she can be in the sun and heals faster. She loves her family and likes visiting them more than being in her own house.

Our hero is the grim reaper. He doesn’t really have ‘real’ name so everyone calls him Grim, Reaper or Death. Prologues can be boring sometimes but I like how in Mated To A Reaper it shows how Grim Reaper just wanted to belong somewhere but he felt more alone with mated vampires than when he’s actually alone. Prologue also explained a lot about vampires and reapers, like what happens when Grim finds his mate.

I absolutely loved the romance! Grim and Ariella would do anything for each other and they need each other. They were pulled to each other since the beginning. Grim never wanted to let her go and all she felt was happiness when she was with him.

14 thoughts on “Audio Book Review: Mated to the Reaper by Alexa Riley”