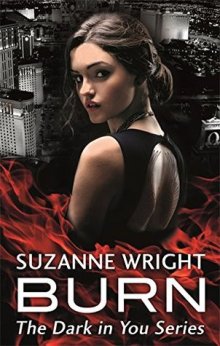 Synopsis:
Part of a small demon lair in Las Vegas, tattooist Harper Wallis lives a pretty simple life. That changes overnight when she discovers that her psychic mate, or ‘anchor’, is a guy who’s rumoured to be the most powerful demon in existence. Compelling, full of secrets and armed with raw sexuality, Knox Thorne is determined to claim her as his anchor, creating a psychic bond that will prevent their inner demons from ever turning rogue. The billionaire also wants Harper in his bed. She’s not so sure she wants either of those things. No one seems to know what breed of demon Knox is, only that he’s more dangerous than anything she’s ever before encountered. But he refuses to walk away. And when an unknown danger starts closing in on Harper, it seems that Knox is the only one who can keep her safe. As Prime of his Las Vegas lair and a successful businessman, Knox Thorne is used to being in control. He’s also used to people fearing and obeying him. Harper does neither, which unexpectedly amuses him. Unpredictable, elusive and complex, she draws Knox and his inner demon like nothing ever has. Knox is used to getting what he wants, and he wants Harper. He’ll have her, and he’ll keep her safe from the threat that looms over her. Because Knox protects what’s his. He won’t allow anyone to take her from him. Even if it will mean letting the demon inside him rise and wreak the havoc it was created to make.

I requested some demon recommendations and Renee suggested that I start Burn which is the first book of Dark In You series. I had never even heard of this series but after rereading The Dark Elements I needed more sexy demons in my life. It’s four book series about Knox and Harper.

Knox Thorne is the creator of the Underground. He’s also rumored to be the most powerful demon in existence. Knox found himself interested from the moment he saw Harper. Knox is very dangerous but he had a sweet spot for Harper.

I love Knox but I couldn’t believe how much I loved Harper. I’m not used to loving lead female characters so much, so she surprised me. She’s not only badass but she’s also really relatable. She didn’t have the best relationship with either of her parents. I mean one of them rejected her and another preferred traveling around the world. Instead of becoming bitter and annoying she’s actually insecure and so used to people leaving that she actually expects it.

The romance is slowburn insta love. They might fall fast for each other but it took long time for anything to happen between the two. Harper doesn’t have relationships with demons and she doesn’t want to get hurt by Knox.

I enjoyed the mystery. It made me question all the people they were suspecting. But I did not enjoy all the political talk.

All in all it was an excellent read. I usually don’t like multiple POVs but duo POV between Knox and Harper was amazingly done. I’m not usually even big fan of slow burn but it was all worth it. Burn wasn’t as swoon worthy as I hoped but I loved it. I can’t wait to get my hand on the next book.