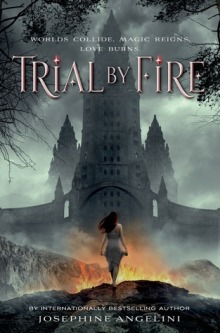 Love burns. Worlds collide. Magic reigns.This world is trying to kill Lily Proctor. Her life-threatening allergies keep her from enjoying many of the experiences that other teenagers take for granted… which is why she is determined to enjoy her first (and perhaps only) high-school party. But Lily’s life never goes according to plan, and after a humiliating incident in front of half her graduating class Lily wishes she could just disappear.Suddenly Lily is in a different Salem – one overrun with horrifying creatures and ruled by powerful women called Crucibles. Strongest and cruellest of all the Crucibles is Lillian… Lily’s identical other self in this alternate universe. This new version of her world is terrifyingly sensual, and Lily is soon overwhelmed by new experiences.Lily realizes that what makes her weak at home is exactly what makes her extraordinary in New Salem. It also puts her life in danger. Thrown into a world she doesn’t understand, Lily is torn between responsibilities she can’t hope to shoulder alone, and a love she never expected.But how can Lily be the saviour of this world when she is literally her own worst enemy?

This book totally sucked me in! I was kinda afraid to read it since all the books with witches have been so bad lately. I tried starting so many for blogoween but ended up DNF’ing them and then giving up but this one was gold.

I love this world. It’s amazing that Lily became a witch from a very sick girl who has accepted that soon she wouldn’t be able to go to school anymore. I found it amusing that people in this magical world didn’t understand a lot of things that were obvious to her, like “it sucks”.

I felt so bad for Lily since the beginning of the book. I can’t understand how her best friend acted like the way he did. I hope Lily gives him hell in next book.

I really enjoyed reading how Lily’s relationship evolved not only with Rowan but the other universe’s Tristan. I know some people tagged this book as love triangle in Goodreads but I wouldn’t count it as one. This actually isn’t as romance packed as books I normally read but I think it’s a good thing plot wise. I still hope there will be more romance in the next book.

I want to know where Lilian’s dad is. It was explained that Lily’s dad abounded her and her mother because of their sicknesses but how about Lilian’s dad? Lilian is a witch so she’s not weak, she’s actually the most powerful person in their world.

One thought on “Book Review: Trial By Fire by Josephine Angelini”