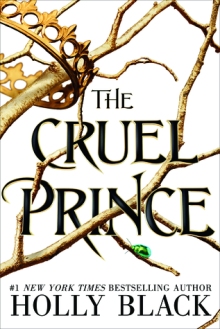 Synopsis:
Of course I want to be like them. They’re beautiful as blades forged in some divine fire. They will live forever.

And Cardan is even more beautiful than the rest. I hate him more than all the others. I hate him so much that sometimes when I look at him, I can hardly breathe.

Jude was seven when her parents were murdered and she and her two sisters were stolen away to live in the treacherous High Court of Faerie. Ten years later, Jude wants nothing more than to belong there, despite her mortality. But many of the fey despise humans. Especially Prince Cardan, the youngest and wickedest son of the High King.

To win a place at the Court, she must defy him–and face the consequences.

As Jude becomes more deeply embroiled in palace intrigues and deceptions, she discovers her own capacity for trickery and bloodshed. But as betrayal threatens to drown the Courts of Faerie in violence, Jude will need to risk her life in a dangerous alliance to save her sisters, and Faerie itself.

This book has been hyped around internet for awhile, but honestly I was never going to read it until one of those book confession accounts in Instagram praised it over and over again.

I absolutely loved the world Holly Black created from page one to the finish. Still I didn’t have much motivation to finish it because I knew what ‘ship’ everyone was crazy about and it was just so toxic. I usually can’t read books without romance but Black wrote such an amazing world that it didn’t even need one.

Most of the time I liked all characters. Sometimes Jude’s family annoyed me but I could understand why they did what they did until Taryn did what she did. It still didn’t make me hate her, thankfully but I just couldn’t understand her choices.

I knew who was going to be The High Lord because I have a bad habit of reading spoilers. I really need to stop doing that *facepalm* but it still suprised me when it happened.

I’m exited for the next book and can’t wait to see what Holly Black has planned to our characters. I think meanwhile I need a little break from the fairy world.

6 thoughts on “Book Review: The Cruel Prince By Holly Black”